Order
Right after the Weather 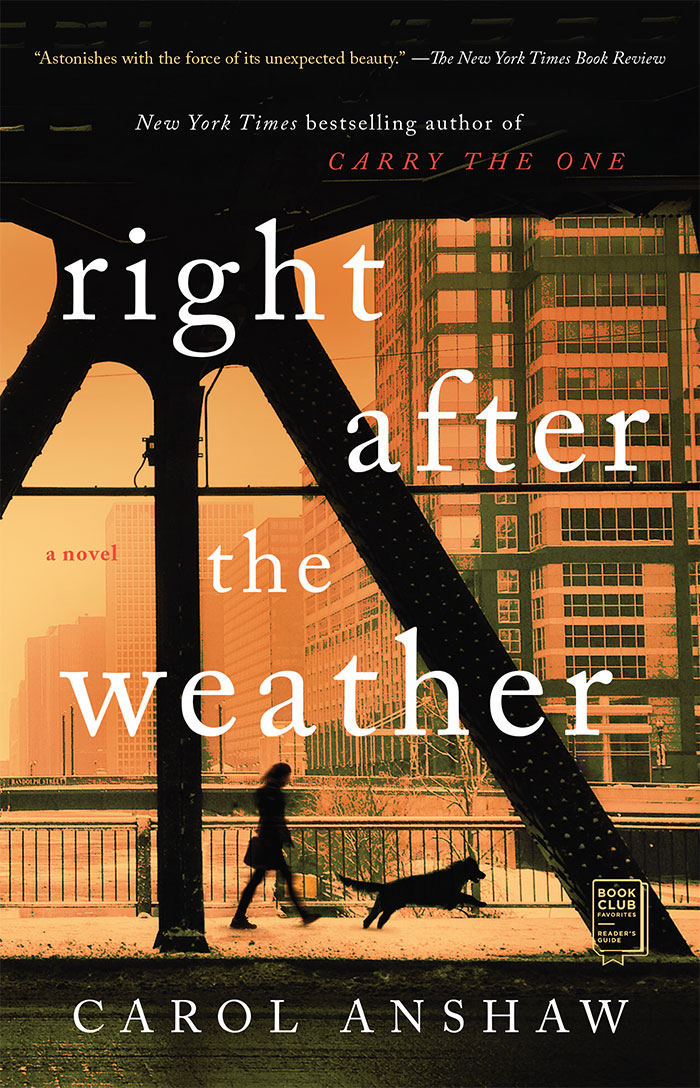 It’s the fall of 2016. Cate, a set designer in her early forties, lives and works in Chicago’s theater community. She has stayed too long at the fair and knows it’s time to get past her prolonged adolescence and stop taking handouts from her parents. She has a firm plan to get solvent and settled in a serious relationship. She has tentatively started something new even as she’s haunted by an old, going-nowhere affair. Her ex-husband, recently booted from his most recent marriage, is currently camped out in Cate’s spare bedroom, in thrall to online conspiracy theories, and she’s not sure how to help him. Her best friend Neale, a yoga instructor, lives nearby with her son and is Cate’s model for what serious adulthood looks like.

Only a few blocks away, but in a parallel universe we find Nathan and Irene—casual sociopaths, drug addicts, and small-time criminals. Their world and Cate’s intersect the day she comes into Neale’s kitchen to find these strangers assaulting her friend. Forced to take fast, spontaneous action, Cate does something she’s never even considered. She now also knows the violence she is capable of, as does everyone else in her life, and overnight, their world has changed. Anshaw’s flawed, sympathetic, and uncannily familiar characters grapple with their altered relationships and identities against the backdrop of the new Trump presidency and a country waking to a different understanding of itself. Eloquent, moving, and beautifully observed, Right after the Weather is the work of a master of exquisite prose and a wry and compassionate student of the human condition writing at the height of her considerable powers.

Praise for Right after the Weather

“Right after the Weather is about the terrifying discoveries we make—about ourselves, about the world—when the membrane separating civilization from barbarity is torn. Carol Anshaw has a genius for rendering life on the page, for characters and situations as ferociously complicated as reality. She is a master.”
—Garth Greenwell, author of What Belongs to You

“Carol Anshaw is one of the best storytellers we have. She sees all the outside and all the inside—of this difficult time we live in, of these complicated, puzzling, heart-stopping lives we lead. No one can put down an Anshaw novel and we are lucky, especially now, to have this one arrive.”
—Amy Bloom, author of White Houses

“This book perfectly captures a moment in time and peoples it with quirky and entirely convincing and entertaining characters. It will make you laugh. It will make you sad. It will shock and surprise you. And you won’t soon forget it.”
—Trish T., Simon & Schuster VP, Executive Editor, on Right After the Weather